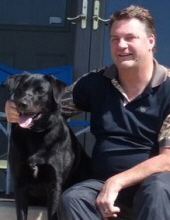 Bill grew up and went to Sun Prairie schools. He married Angela McGowan on June 5, 1987 and together they had two children, Nicole and William H. Spahn III. Bill worked at Spahn Warehouse Liquor Store for many years learning from his dad, how to be a successful businessman.

Bill was a walking miracle, having been paralyzed in a diving accident at the age of 12. He was considered by all a quadriplegic, however, due to his courage, strength, determination and the love and dedication of his father and family, he beat the odds and walked out of the hospital. Although he had more than his share of pain, he endured and enjoyed life to the fullest. Bill loved shooting pool, snowmobiling, boating and especially fishing. He was the founder and host of Fishingwisconsintv.com, a popular fishing show which aired for six years. His favorite times included fishing with his dad in Canada annually. Bill was deeply loved and will be missed by all whose lives he enriched.

Bill lived a full life, he had everything he ever needed or wanted, although he would have given anything to have been able to run once more, he often stated. He rarely complained of his pain but confided that his health had been failing for years. He had a good life and we had him for 44 more years than we might have – for that we will always be grateful. Bill would not want us to grieve for him. He wanted us to celebrate his life and not be sad. Bill would want you to go fishing and always, always LET ‘EM GO!!!

Bill’s wish in the book about his life, Never Give Up, was that if by telling his story he could save one child and family, from going through what he, and we, went through he would have done a wonderful thing. In lieu of flowers, memorial donations may be made to United Paralysis Foundation, 618 Ritter Dr., Batavia, IL 60510, a non-profit organization dedicated to research to find a cure for chronic spinal cord injuries.

Bill’s family made a $1,200.00 donation to the United Spinal Cord Research Foundation in his memory.